Starting the Year the Nirvana Way

I love Christmas – always a good reminder that I’ve been lucky enough to have a family consisting entirely of top-notch people I enjoy spending time with. Now! How did you kick-off January?

People underestimate the value of a finishing line and a starting line. Even though it’s artificial there has to be a point where something finishes so that as much as possible can be packed away – that word ‘closure’ applies to average everyday life as much as it does to crises and drama. The move from one year to the next allows at least the pretence of a fresh piece of paper on which to plot the course of the next year – it’s why gym attendance peaks in January, slowly declines to a mild bump just as summer starts, then declines all the way to the end of the year. It’s why the job market kicks into gear as organisations try to fill their vacancies and job-hunters get their motivation to keep trying.

What’s fun about the Nirvana stat posts (look in the left-hand column on the screen, scroll down to the Categories – they’re another way to find/see the 310 posts buried on this blog) is the line between revealing what isn’t perhaps so obvious with the naked eye versus potentially inventing something via numbers and seeing something that isn’t there. Great fun! On top of that, often what I’m seeking to reveal isn’t some earth-shattering new idea, it’s simply a confirmation that Kurt, Krist and Dave (et al.) were normal people and as prone as anyone else to routine, habit, the unconscious-making of patterns in life. That’s different from the proposal that there were deeply considered and plotted diagramatic masterplans – intentional behaviour does not necessarily mean conscious choices.

Nirvana, I feel save saying, were as sensitive as anyone to the desire to kick-start each year – the difference between them and the majority of us is that their focus was music so the way to set the year off at a flying pace was to commence with a musical endeavour. Can I prove it?

Well…Yeah. Over the years in which the band was in existence, here’s the pattern of which months they recorded in and how many times over that period: 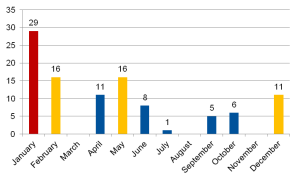 I even allocated all songs recorded during the Bleach sessions in December 1988/January 1989 to December and still Nirvana recorded nearly twice as many songs in January as in any other month. Just because I enjoy muddying the waters of my own thoughts though – here’s the pattern of number of days spent in studio as best as is known: 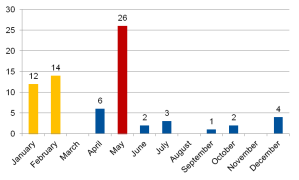 On the one hand, it shows how a single odd result can skew data when working with small quantities – the Nevermind sessions of May 1991 were the lengthiest Nirvana ever indulged in, an outlier, and they make things look different…However, look again at the overall tendency toward winter working – December, January, February. Also, it points out that though Nirvana did persistently and consistently head in to record in January, they never embarked on a major recording session in that month – May comes first on this chart because of the Nevermind session, February comes second because of the In Utero session. January was their month to get warmed up, to set things in motion, not necessarily to finalise end-product.

Examining the songs recorded during each month’s recording sessions that point becomes fairly clear. From the January 1988 recording session only two of the tracks recorded made it onto Bleach and only because they couldn’t be improved on. Prior to Incesticide only a couple of other tracks were tossed out as compilation filler. January 1990’s Sappy was famously abandoned, of the seven songs from January 1991 only Aneurysm and Even in his Youth were officially released but only on a single, January 1993 only yielded Gallons of Rubbing Alcohol as the European bonus track for In Utero and January 1994 didn’t emerge until that glorious posthumous day not much shy of a decade later.

So! There we go…Start your 2014 the Nirvana way – start something in January. Go forth and make it so…