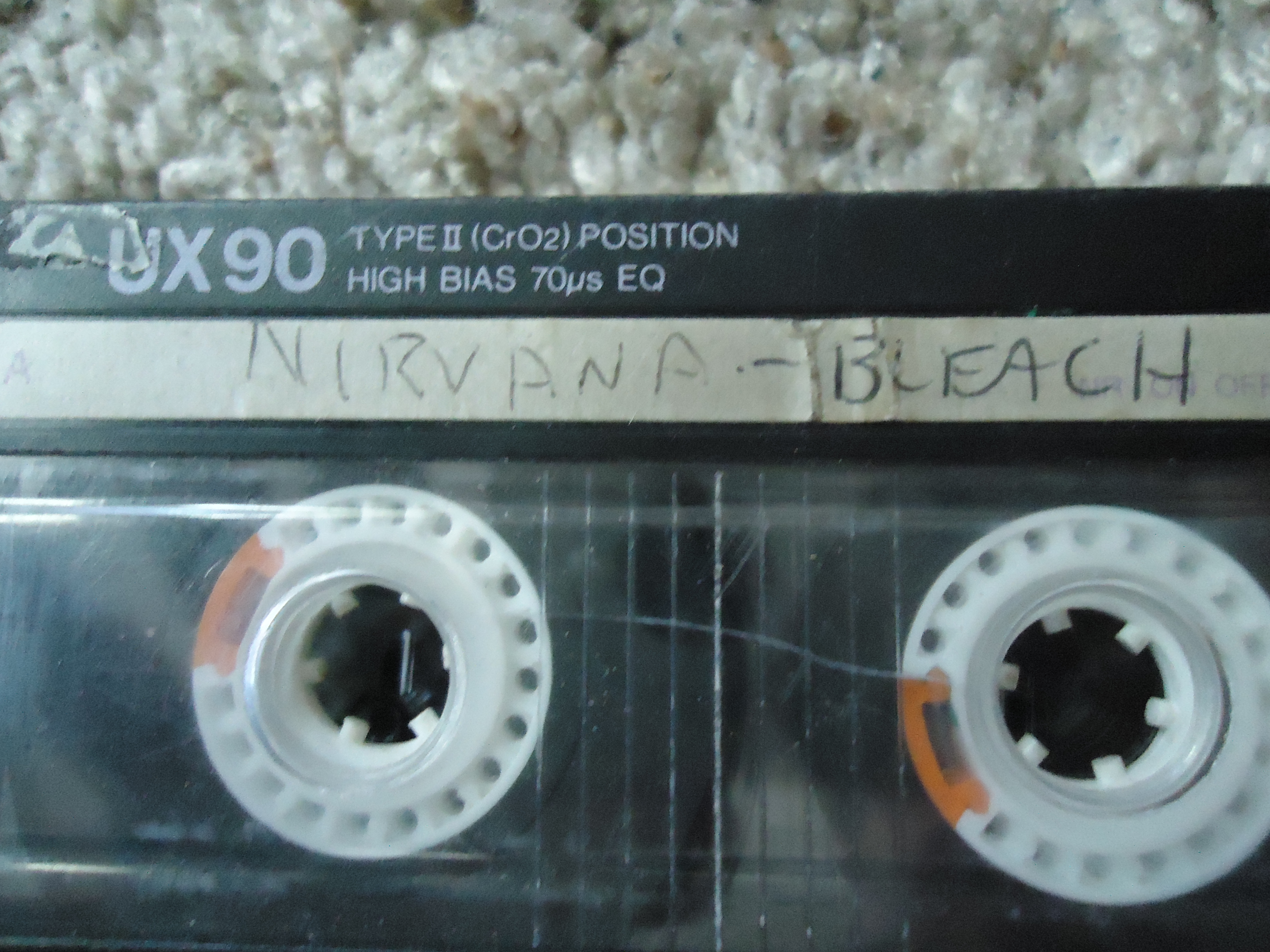 I’m fascinated by the song Big Long Now. Ignoring questions of good/bad (given those are personal opinions of no relevance to anyone other than oneself) and ignoring queries about the audio quality of the recording (given such factors are technological issues of neutral import and no relevance to whether a track is good/bad/indifferent), what interests me is its unique status. It’s the only original outtake from the Bleach sessions – the Chad version of Hairspray Queen simply being an unseen alternative to the January 1988 version. That singular status makes it intriguing to me. In the interview for the Dark Slivers book, Jack Endino stated that there were no additional takes of Big Long Now “one take, bam!” which means there’s that version on Incesticide, the rehearsal video on With the Lights Out…And that’s it. That fact that it’s the only song on the album-length releases during Cobain’s lifetime to not end up on a live bootleg, to never make it onto a live recording – it gives it an air of mystery.

In passing, while touring Tacoma, I was spending the afternoon with John Purkey and he pointed out that the song was featured on the demo tape Kurt Cobain personally handed to him – the raw tape of the Bleach sessions. I commented on how unique it is, that there are no live versions and no one knows when it was played…John casually replied “that’s not strictly true – I saw it twice…” And he remembers one of the venues too.

In the book I mentioned that Chad remembers playing the song – as does Jason Everman. Actually, heck, I don’t do this often but I’m going to quote my own work – the next two paragraphs are from Dark Slivers: Seeing Nirvana in the Shards of Incesticide –

Chad Channing was drummer from sometime following a May 21, 1988 show, until his last show with the band on May 17, 1990. Chad has claimed the song was played during his time with the band. It has also been claimed that it was a favorite of Jason Everman—Nirvana’s second guitarist from February to July 1989. Also, in Portland, Oregon on June 10, 1989 a fanatical fan requested the song. Krist Novoselic then replied “we don’t play that one anymore.” The phrasing suggests there was a time when they did. Likewise, the fact the fan asked the question implies the song was played given he was asking for a song that was less than six months old and unreleased at that point. Unless the individual concerned had attended a home rehearsal he must have seen it live.

Furthermore, the timing is right. From April-October 1988 only eleven songs are known from sixteen shows and between January-July 1989 only three full and three partial set-lists are known from twenty-seven shows. This is the biggest gap in the Nirvana records. Tightening the noose; three of five set-lists are known for October-December 1988 so it makes it unlikely the song was unveiled until 1989. Yet the song is declared long dead on June 10,1989 and absent from the complete set-list of the band’s only show in May. This makes it possible to say that if, as the witnesses indicate, Big Long Now was played live, we can surmise it happened during at least one of the ten shows that took place between January and April 1989.

SO! Where does Jon’s information fit within that…? Well, what he said – without any further prompting – was “I saw Nirvana play it at a Dorm show at the Evergreen State College…” The first show he’s referring to is Jason Everman’s first show with Nirvana where they played Dorm K208 sometime in February. There’s a partial set-list available from the K208 show, just six songs. In other words, the claimed sighting of Big Long Now, as a live song, take place precisely where the evidence says it should be. Now there’s a show it’d be beautiful to see surface…

It also makes Big Long Now one of the songs Jason was drilled in upon entry to the band and prior to taking the stage with Nirvana – sometime in January he was made to learn this track so there’ll be rehearsal tapes around that time too, if we’re lucky and the band preserved them. It also clear that the song was one of the small number of songs created from scratch probably only just in time for the Bleach sessions alongside Sifting – early December is that first sighting…

2 thoughts on “A Sighting of the Big Long Now”