Blew is a special song. Sub Pop, apparently, insisted Nirvana arrange Bleach in order of quality – best song first and, in my opinion, within the context of Bleach identity Nirvana the heaviness of Blew was the right choice. That the band didn’t particularly resent the choice can perhaps be implied by the fact that Blew is the third most played Nirvana live song (224 definite occasions beaten only by School on 270 and About a Girl on 251) and was the joint most long-lived Nirvana song on stage (played in 47 months – equal first with School) based on the current data at the Nirvana Guide. 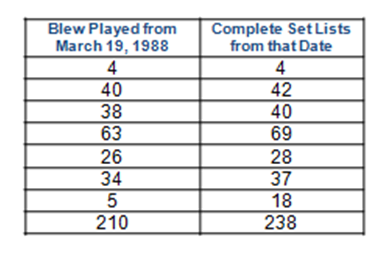 Blew, far more than Endless Nameless, was the song chosen to smash the show finale, to send the audience home on a high. Can I prove it? Well…Yeah, actually. I’ve a spreadsheet I’ve built showing the complete set-lists taken from the Nirvana Guide…I know…Obsessive or what? Blew is introduced to the set-list, apparently, on 19th March 1988. From that point, of 238 completely known set-lists between that date and 1st March 1994, Blew features 210 times. It formed the set-closer a whopping 88 times – quite impressive dominance given 33 other songs were the closer at some point or other. The nearest rival is Territorial Pissings on 49. 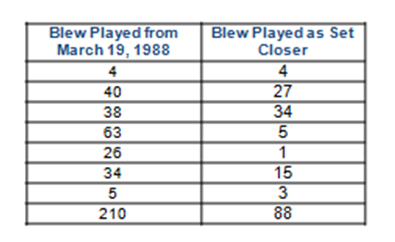 There’s a visible progression over time of course, 1994 – with Blew now a seven year old song – sees the first prolonged spell of absence for Blew; it was only played five times that year, only three of those times during the fifteen dates in Europe. On the one hand, while Blew remained an incredible persistent presence right through until that final year (as shown in the table below)…

…It also gradually stopped being the likely set-closer, other songs took over and became the preferred option. What is noticeable though is that Blew never ceases to be a potential closer – it’s a set closer in every single year even if only once in 1992. It does, however, tail off as the most common set-closer from 1991 onward. It’s also visible why Endless Nameless received its reputation as Nirvana’s most common closer – it was most common as a set-list choice between August-November 1991 when Nirvana’s balloon was going up.