Really, there are only three locations of utter significance to the Nirvana story; Aberdeen, Seattle AND Olympia. While Aberdeen/Hoquiam was the birthplace and halcyon origin of our ‘hero’ and Seattle the location that witnessed his demise, it was Olympia in which he found his only true home in adulthood: 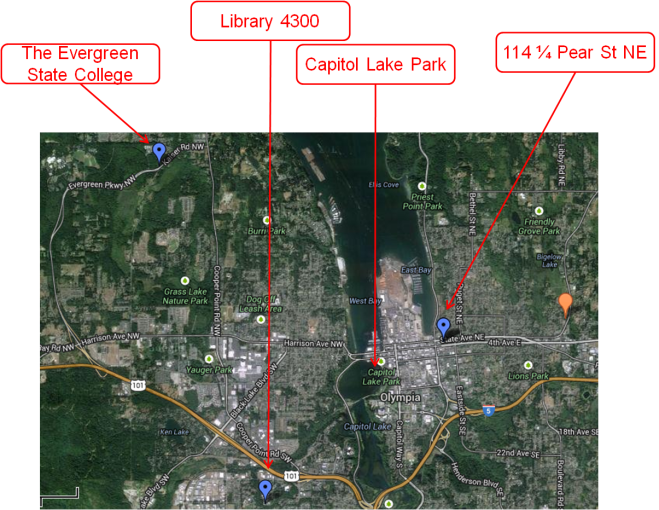 As described before, 114 Pear Street (two flats therein) was the first stable home Kurt Cobain had after a lengthy period of youthful nomadism and even genuine homelessness; from the age of fifteen until he hit twenty years old he never spent a full year at any one address. Pear Street, by contrast and happy coincidence, served as his home from the time Nirvana commenced properly in spring 1987 until just before the Nevermind ball rolled down the hill in July 1991 – the only home he lived in longer was 1210 E. First Street, Aberdeen a phase which ended at his parents’ divorce. This is the true place of pilgrimage for Nirvana fans; this one building saw over 75% of Cobain’s song writing take place – it may be higher: https://nirvana-legacy.com/2013/01/30/four-walls-and-what-was-made/

This one location alone makes Olympia a worthy visitation…But, and this is an argument, in essence, Nirvana were always an Olympia band. Until the band exploded it was Olympia where Krist lived, where Kurt lived, where the band’s friends like Slim Moon lived, where K Records resided, where Kill Rock Stars resided, where so many of the band’s gigs took place. Seattle dominates because Sub Pop came to own the narrative of grunge and because Nirvana retreated there after fame when all eyes were on them. Prior to that, this was a solid Olympia band in ethos as well as home.

I admit though, the map doesn’t show too many places worthy of a visit. I’ve accidentally skipped Rignall Hall on 8131 Urquhart Rd NW plus the North Shore Surf Club on 5th Avenue. That still makes it the number two location in the world, behind Seattle, for Nirvana related sights.