To tour the key Nirvana and Kurt Cobain locations in the State of Washington doesn’t require a car, merely some patience. Contrary to popular belief the United States of America does indeed run fairly regular public transport services that will serve most of the desired locations. There are some outlying places that probably aren’t worth the effort depending on how completist you wish to be; you could go see 17 Nussbaum Road, Raymond to get a sense of how tiny and ordinary Nirvana’s origins in 1987 were – you could visit the house at 33401 NE 78th Street, Carnation but it’s hard to see it without invading and trespassing on the property which is probably best avoid, meanwhile looking at old concert venues in Bellingham, Auburn or Ellensburg seems uninteresting.

There is, however, a decent cluster of sites in the area around Aberdeen, Hoquiam and Montesano over on the Pacific Coast. The maps below indicate locations, primarily of homes from early in Kurt Cobain’s life:

The Aberdeen map shows a couple of his early rented places, the house he lived in from 1968 through 1976, plus the hospital he was born at and briefly slept in during one of his spells of homelessness in his late teens.

Moving ever so slightly along the coast takes you to the house in which a newly born Kurt Cobain lived out his first year: 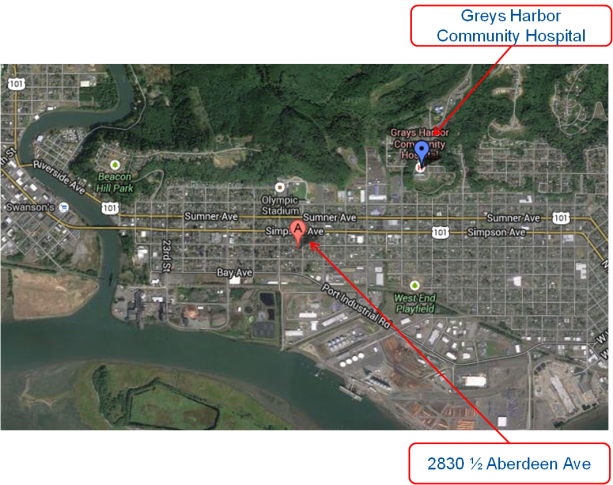 And finally, heading down the highway to the East takes you to Montesano and to the home Kurt shared with his father for a number of relatively unhappy and troubled years.

Like Loading…
← Kurt Cobain and the Atlas of the World’s Worst Natural Disasters
→ The Grand Tour Part 3: Nirvana in Tacoma