Over past weeks we’ve looked at Nirvana’s U.S. tours via maps, simply showing them criss-crossing the country, the standard patterns and behaviours. 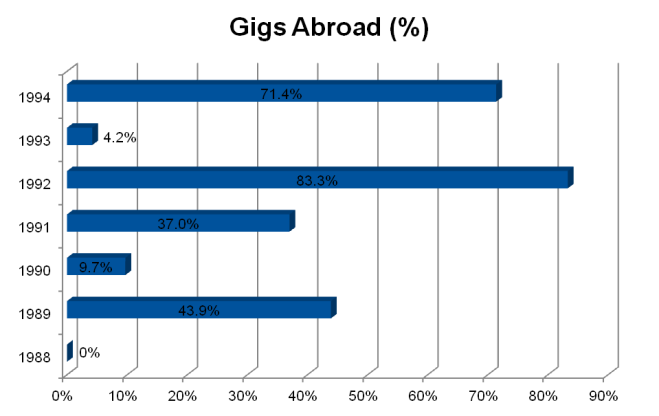 All I wanted to show here is how Nirvana go from being their Washington State beginnings to a fairly even split between U.S./Europe for in 1989 and 1991 to the hugely warped statistics for 1992 and 1994. The chart shows how focused Nirvana’s activity became; while in those earlier years they’re able to cope with playing close on 100 shows in a year and covering both the U.S. and Europe in a single year, post-fame its becomes a two year cycle to make it through those areas. There’s no balance.

I’m more accepting of a U.S.-centric Nirvana (1990, 1993) given they’re an American band, the product of a continent-sized country with the world’s then biggest music audience and touring network. I’m surprised how much of Nirvana’s time was spent abroad overall: 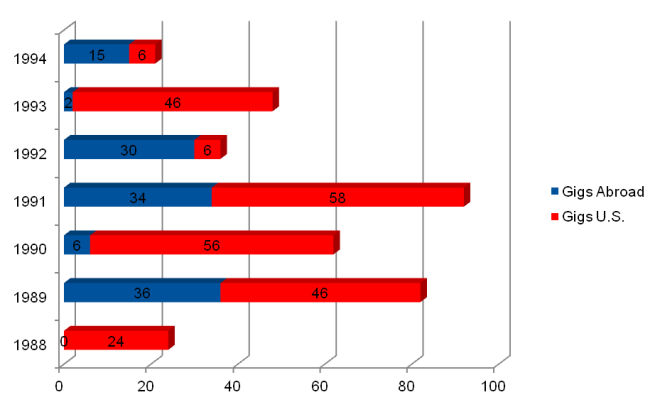 What the maps really brought home to me was Nirvana’s progress; their existence solely as a Washington State presence in 1987-1988, virtually a hobby band; the way that, from 1989 onward, whenever they retreat home after a tour their territory now covered Washington, Oregon and California and their quiet phases would still involve shows in all three states — they’d gone from being a Washington grunge band to being a West Coast alternative rock band. The regular patterns in the touring also; the tours round the East Coast tending to circle Illinois, Michigan, etc. before taking a dip across the border to Canada before criss-crossing the U.S. North-Eastern states. The pattern for concluding tours had a similar stability; a jagged dash in the direction of home usually swooping down the West Coast then haring across country back to refuge in Seattle. It was interesting as well seeing the scale of the In Utero tour; while earlier years had seen comparable (or even higher) numbers of shows, the 1993 U.S. tour seemed designed to take in as many tours as possible, it wasn’t as concentrated as in earlier years. Nirvana’s ubiquity as a popular act meant bringing them to new states made sense; they’d get a decent paying audience — not something that could have been guaranteed pre-1992.