Everyone gets stress dreams. They’re the visual imagery representing mental pressure – the most common motif is being chased by someone or something, falling dreams have a similar impetus behind them (things being out of control, no longer having one’s grip and so forth.) I’m aware that ‘telling people your dreams’ is high on the How To Bore list…But what the hey, feel free to stop reading here.

My stress dream has been pretty consistent since I was in my late teens. What happens is I’m in a record store or at a market stall. I note that they have a load of Nirvana bootlegs, I mean, a TON of Nirvana bootlegs – more than I’ve ever seen in one place. My excitement becomes sheer awe when I realise there are song names I’ve never heard, or song names that have only been rumoured, song names that I’m sure no one knows. I’m seeing ‘Suicide Samurai’, I’m seeing ‘Lullaby’, I’m seeing ‘Song in D’. I’m seeing an array of covers, I’m seeing bracketed notes telling me ‘alt lyrics’, ‘instrumental’, ‘early version’, ‘demo’, ‘acoustic’, ‘electric’.

The detail is amazing. I can feel the pressure building – I only have enough money on me to buy one CD. You can tell I’m a child of the nineties given that particular physical media is at the centre of my dream. I’m flipping CD cases and reading the brief descriptions on the back – which gig was this song supposedly from? When was this song recorded? It’s an indication of how powerful the Outcesticide series was for me as a teenager that the backs of these discs are formatted like Outcesticide II and III and give summary details for each song. 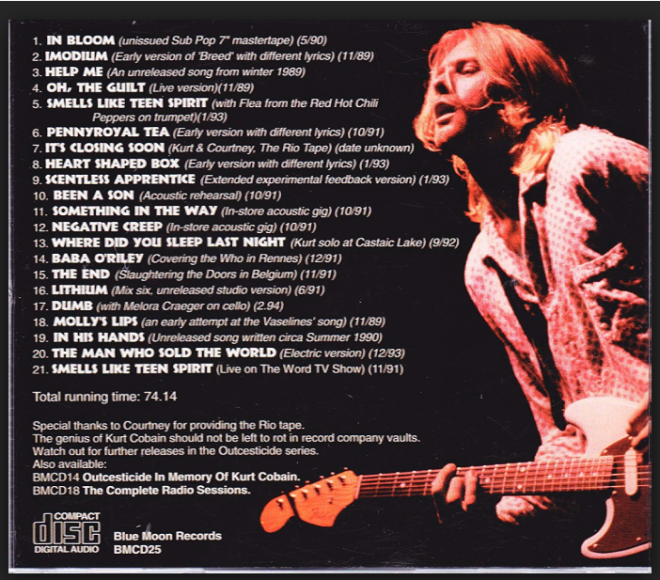 The guy running the stall, the guy running the shop, he won’t allow me to put the discs on his stereo and flick through before I buy. The dream seems to be pre-modern because I don’t whip my phone out and start browsing YouTube or checking for information online about these mysterious songs. I have no way of figuring out which one to buy. I’m just going to have to choose. Tension builds.

I realise I’m looking at songs that no one realised Kurt Cobain created. There’s a showcase gig listed that no one knew took place where, in 1994, Nirvana present three-four brand new songs with names that only exist in my dream. I’m in holy grail territory: the final Cobain demos, the last songs Nirvana had finished – and not a single soul ever let on they existed, never in 25 years…How do I choose? What do I have to leave behind?

And that’s it. I’m trapped. I’m stuck there reading details and trying to use that data to make an impossible choice. I wake up inside a moment where I’m sweating and stressed, reading and re-reading, juggling dates and names and descriptions trying to add up what might theoretically be more valuable than what, all the time aware of the proliferation of fake songs and incorrect song titles and minor rather than substantive differences that haunted bootlegs…

Yup. Geek dream – that’s for sure. That’s what my visits to certain record stores used to be like though, so it’s partially a memory, not just a dream. I remember finding a disc – relatively late in my bootleg-collecting spell – that listed ‘Meat’ as a song title. It was the only thing on the disc that particularly interested me, the rest was a hodge-podge of live cuts siphoned from elsewhere. Luckily the store allowed me to listen and, of course, it was Dave Grohl’s cover of the Unleashed song ‘Onward Into Countless Battles’ – nice to hear but hardly worth the marked up price point:

I’m not too sentimental about some aspects of the bootleg days: bootleg discs with the name Nirvana on tended to be way overpriced – £15 a pop. You’d get home to find the disc sounded like it was recorded through the echoing pipes of a toilet cistern. Tempting song titles would turn out to be mislabels or gig/session details were wrong and you’d find it was something you’d already heard. It was a real quagmire at times.

On the other hand, how often in life does something feel like buried treasure? It’s hard to describe how excellent it used to feel walking into a store and seeing something special. The anticipation, the spirit of discovery. Circa 1998-1999 there was a pretty common perception that the the words on the back of Outcesticide II about ‘record company vaults’ were literally true: that there was the kind of big metal cell you’d see in a heist movie, full from floor to ceiling with perfectly preserved Cobain/Nirvana demos – that there might be hundreds of entirely unreleased songs…It’s that spirit, the sense of unlimited potential, that is at the root of the dream – that moment in time.

Of course reality intervenes. I was reminded of it though when I walked into X Records in Bolton (https://www.tripadvisor.co.uk/Attraction_Review-g187053-d13110119-Reviews-X_Records-Bolton_Greater_Manchester_England.html). There came a point where I had to turn to my mother and inquire whether she could go and complete the Christmas Eve family shopping and I would walk home…What I couldn’t tell her was that I quite literally could not leave – there was no way I could walk out of that store. None. I searched through barely a fraction of the shop’s selection before Christmas early closing – it’s a real Aladdin’s cave! Rarities, bootlegs, old CD and vinyl singles…I was in seventh heaven. And the staff were great! I felt sheepish that I was still swapping stuff back while at the counter…

The photo at the top is the Nirvana shelf. Sure, it’s 2018, I know now that there’s only a hundred unique originals written by Kurt Cobain that have been released publicly. I know that the record company isn’t sitting on a treasure trove of polished perfection. I browsed the back of the bootlegs and recognised gigs and songs that I knew pretty well because it’s all out there now pretty well…But it was nice to remember that moment of ‘anything possible!’ And to still believe there are surprises.