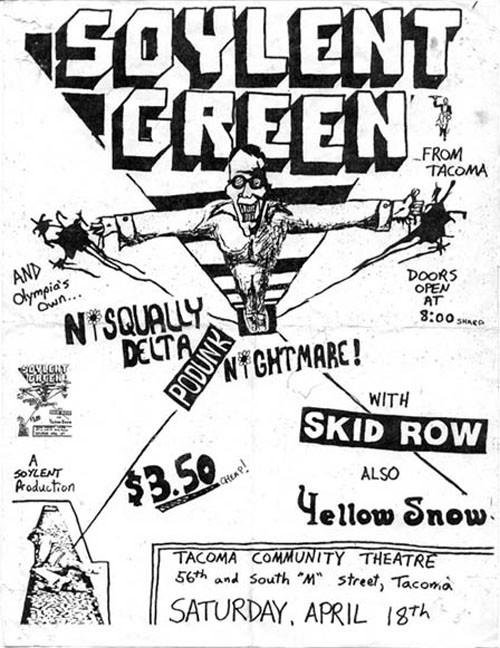 I’ve been rather blessed these past couple years by the Purkey brothers, both Bruce and John were a huge support during the work on “I Found My Friends.” Today I’d like to focus on Bruce’s band Soylent Green who played alongside Skid Row (A.K.A. Nirvana’s incarnation for much of 1987.)

Bruce Purkey — The band I was in previous to Soylent Green, The Grind, featured Kurt Flansburg on lead vocals. (he was later in Dangermouse.) At the time he was in our band, he was dating Tracy Marander, so I got to know her pretty well. I am sure you know that name…

My brother and I grew up in a pretty boring house-hold musically. My parents listened to the worst of 70’s AM music. They didn’t really restrict us from music, but they also didn’t really encourage or help our musical tastes grow. By the time I reached Jr. High, in the late ‘70’s, I was mowing lawns and doing chores, earning money to buy my own albums. I started with KISS and Judas Priest, Scorpions, AC/DC, catching up on all the rock that had passed us by. Before long, my two friends and I were ahead of the curve, leaping head-long into NWOBHM with bands like Motorhead, Iron Maiden, Saxon, Tygers of Pan Tang. We were deep into heavy music at that point.

In high school, I and my friends George and Bill, would take art classes pretty much just to make our own Motorhead and Saxon t shirts. It was in this class that we met a kid who was into punk. He made us a mixtape of Killing Joke, Sex Pistols, Circle Jerks, Black Flag, Dead Kennedys. We were hooked. It had the aggressive edge of metal, but was actually about something. It seemed more primal and really tapped into all of the feelings we had as teenagers. In addition, it seemed accessible. We were never going to take the time to reach the technical prowess of our favourite metal gods, but even we might be able to start a punk band. So, there it started, we were going to buy any punk we could find and try to start our own band.

I bought a cheap guitar and a shitty amp. My little brother John, only 12 or 13 then, had a couple of drums, my friend George got a bass and amp, and my friend Bill would sing/scream. We came up with a band name, ATG (Against the Grain). It seemed suitably anti-establishment. Little did we know, we were literally one of the first and only punk bands from Tacoma. We played a couple of house parties, my brother John’s Junior High School, then John met some other punks from across town  — real punks with a real punk rock house. John Grant, one of the guys from the 56th Street house, AKA the Hell House, enlisted John into his own band, Noxious Fumes. John played with us too, for just a bit longer. Next Bill got his girlfriend pregnant and left the band so we got John’s friend, David, to sing and changed our name to Vampire Circus. That band only played a couple shows — most notably a show at The Tropicana in Olympia, where I got to play through Buzz’ (Melvins) amp — before my brother left the band for good. Without him we had to start again. The band reformed with Shawn (later guitarist for Subvert) and Kurt (later singer for Dangermouse), plus a second guitarist whose name I can’t recall. George was really into skating by this time so we ended up renaming ourselves The Grind, partly to describe the music, partly as a skating reference.

So, it’s ’83-’84 by now, we start playing a few shows in Seattle, mostly at a place called the Gorilla Gardens. It was an abandoned movie theater split into one side which would usually have metal acts while the other side had punk acts. Again, times changed, our second guitarist moved to California, Kurt moved on, so we turned into a four-piece with myself on guitar, George (the other founding member) on bass, Matt on vocals and Fred on drums and now became Soylent Green. As you can tell, I’m an avid movie fan hence why I always pushed for horror/sci-fi movies as band names hence Vampire Circus (Hammer Films) and Soylent Green. Fred’s father owned a meat packing plant, Crown Meats, so we made that our practice space. At first, we tried practicing out in a storage shed, but it had metal walls and was very noisy. For a short while, we actually practiced in the meat locker, surrounded by sides of frozen beef (think Rocky). Once again, it was very cold and the concrete echoed. Eventually, we moved our practices to the sales office. It was warm, well-lighted, carpeted. We dreamed of recording a single or album, but sadly never did. Finally, we decided to just record our own tapes and sell them at shows. We rented a multi-track PA mixer from a local music shop and recorded our music live straight onto cassette. It was very rudimentary, running, essentially four mics to a stereo mix, then flipping the tracks to even it out and dub copies. We made two demo tapes over the next year or so, even selling a few copies. We had a few fans, but mostly just played for fun and an excuse to go to lots of shows and hang out with people. After the summer of ’87, I went to college in Bellingham and the band broke up for good.

Before and after The Community World Theater, there were not a lot of band-friendly venues. Most of the venues were pretty quick to close down, or just bars, rarely good to bands, pretty much paying them little to nothing, run by people who didn’t really love the music scene. The Community World Theater was a rare thing. Run by Jim May, one of us. He didn’t make anything on the venture, I’m sure. It was probably a huge headache and I would guess it lost him money, but for a brief moment, the kids had their own place to play. Sure, it was a former porn theatre with no heat and a shitty PA, but it was ours. It is no accident that The Community World Theater is remember fondly by most everyone who ever played there, or saw a show there. It was as if for a moment, the punks actually ran things.

You’ll notice the “no dancing” sign isn’t always present. If I remember correctly, that was behind the movie screen. What Jim May used to do was set up the headlining band’s equipment behind the screen, then, when the earlier bands were done they would just take their equipment off-stage, raise the screen, and the final band was ready to rock. I think this night was one of the few times we headlined. Frankly, we weren’t near as good as Skid Row, but at that point, we were more of a known quantity.

And I drew the flyer for the Nisqually, Skid Row, Soylent show.

2 thoughts on ““Bands Who Played With Nirvana”: Part One — Soylent Green”