No Seattle: Forgotten Sounds of the North West Grunge Era

No Seattle: Forgotten Sounds of the North-West Grunge Era – Track Listing and Commentary

OK, I had nothing to do with this image. It’s important to say that because I think it’s a gorgeous photo – sorry my photo of the art doesn’t do it justice. I’m used to parodies of the Nirvana ‘Nevermind’ cover art…But this is beautiful in its own right and the choice has other levels – the crystal blue eyes, the baby blonde hair, the artist has picked a dead ringer for Cobain as a boy. Why does it matter to me? Well, it’s precisely why I thought Soul Jazz were a good label to speak to – they actually really think about what they’re doing and even this image from inside the CD case has been considered and chosen specifically. Plus, the release is a real snapshot of the musics and bands surrounding Kurt Cobain during the time he spent playing in the State of Washington before fame took him off elsewhere primarily playing LA and Europe (because that’s where the business people and the music media live – primarily – so that’s where every band has to end up eventually…)

So! Track listing – sorry for the delay – plus I’ve only had time to add my personal thoughts on the first disc – I’ll deal with disc two in a day or so (apologies! Give me time!): 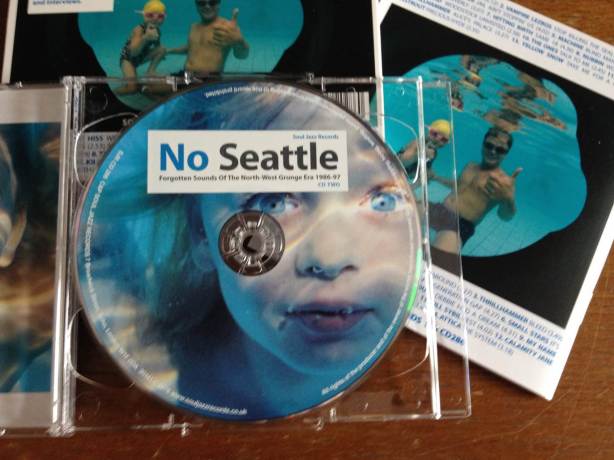 4 responses to “No Seattle: Forgotten Sounds of the North-West Grunge Era – Track Listing and Commentary”