A first thank you, Mr. Marcus Gray was the individual who first shared the Mojo article over at LiveNirvana. Much appreciated! Next, further beautiful entries in Mr. Gray’s Parasite art project: 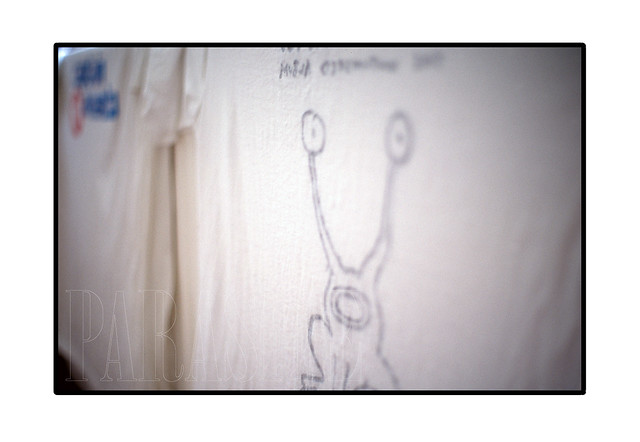 I’ve commented on it before (https://nirvana-legacy.com/2013/03/02/art-on-the-end-a-fresh-cobain-artwork/) and still find so much to enjoy in these knowing glimpses of meaningfulness that rest on the bedrock of two decades of Nirvana/Cobain knowledge to gain their deeper associations. The brain flickers back through other images and photos when faced with Marcus’ work – a chain between past works and this present shot. The bridge with KURT etched into the paintwork stands out for me also. Digest and enjoy, there’s a fine mind at work here playing visual games with over-informed viewers.

On the In Utero subject, for the best synthesis of information and options get over to LiveNirvana and enjoy the 69 pages (!) of the ‘Speculation Thread’ – I’m just summarising and giving my take here. Thank you to http://nirvananews.tumblr.com/image/56900709444, for the picture and, alas, unfortunately for rather knocking the wind out of everyone’s sails. In summary, the Live n’ Loud Audio/DVD components are confirmed, the debate remains around the precise contents of Disc 1 and Disc 2 which seems to be listing:

I’ve gone bug-eyed trying to zoom, refocus and discern the slightly obscured text on the picture of Disc One but it reads right to me. In summary, it looks like the Mojo article didn’t hide or veil any of the rarities on the release – I guess they somehow scooped the exclusive.

I’m open to seeing this change a bit but not by much – if the bonus video footage and any unmentioned songs added up to ten, or even just to five further tracks I’d expect the release to say 75 or 80 tracks. So don’t hold your breath for more than the stated content is all I’m saying. I don’t foresee Universal withholding mention of other significant unheard material if it was to feature. Disappointed? A touch. It seems to suggest that Universal is run by audiophiles who appreciate a slight tweak to a song, or by dance/pop fans who haven’t quite realised that rock fans are far less impressed by remixes, something Cobain and co. never saw fit to indulge in during their lifespan as a band. Again, I’m open to reinterpretations and reconstructions but ultimately I’m happier with lower sound quality but more intriguing vestigial practice material showing songs coming together. But there’s no happy answer, I remember With the Lights Out getting flak for including Cobain’s acoustic home demos because of the low fidelity and whacked out style they displayed – what the hey, I loved them.

One thought on “In Utero: Further Confirmation…And Viewing The Parasite”