It’s a heartening experience looking at the live record for 1992 and realising that, in the doldrums of what was a highly uncomfortable year for Nirvana, the three gentleman concerned retained a chemistry so powerful that there’s barely a single night where the set-list remained unchanged. During what I’d always thought of as a fallow period for the band, the latter half of 1992 — cancelled tours galore, curtailed recording sessions, band strife over money — they were constantly introducing or reintroducing songs to the stage. I recall interviews in which Krist Novoselic claimed the band couldn’t play much new in 1992 because they were getting bootlegged all the time (he seems to have had a real thing about bootlegs given that featured in his explanation for Incesticide too.) Frankly it belies how much unusual stuff Nirvana did.

1992 should be a relatively easy year to study by comparison to 1989; firstly there are as many show in the year as in just the second half May-Dec of 1989, secondly, there are only seven gaps in the record, a mere 20% of shows compared to 1989’s 48%. I admit I set off with high hopes then rapidly ran into difficulty. The problem is that each time the band pause in 1992 they tweak the set-list. Instead of the rigid order present across the first seven songs in most late 1989 performances, or the barely flickering order on the In Utero, the set-list in 1992 isn’t a diktat, it’s more of a spine around which the band swap and switch elements. It doesn’t make it impossible to predict what happened — there’s still only a limited number of songs appearing consistently — but it limits how many songs we can place in a set location in the sets: 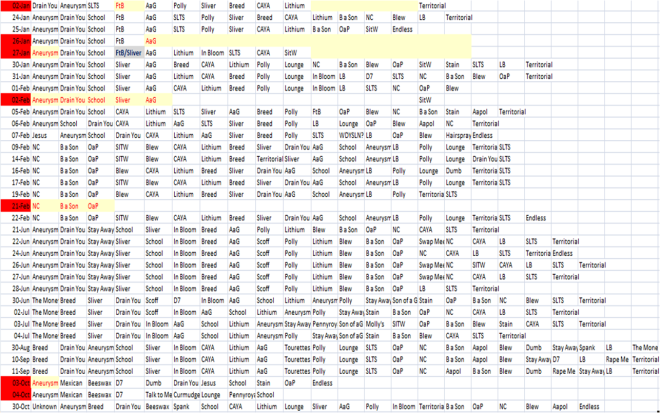 As usual, it’s those opening songs that are most predictable; three performances of Aneurysm, two of About a Girl, one each for Floyd the Barber, Drain You, School, Sliver, Negative Creep, Been a Son and On a Plain. Compare the pattern to 1989 or 1993-94. The opening trilogy changes in January, in February, in June, in June again, in August, in October, then in October again — that’s remarkable compared to May-Dec 1989 when there were ‘blips’ for one show in May and one in August and otherwise only two consistent opening sets on display. That is a consequence of the more regular pauses in touring compared to prior breakneck years.

In terms of ‘historical events’, January witnesses the death of Floyd the Barber as a consistent presence in the band’s set. This holdover, written in 1987, makes its final appearance for the year on February 5 but it’s likely either January 26 or 27 was the last time it was a core component of the repertoire — it’s fun being able to see, to within a 48 hour period, where the changeover happened.

I admit I’m determined to finish this exercise…There’s vast space for unusual arrivals and I want to establish as much of it as possible. I admit it’s long-winded, at times you’re seeing my full ‘working out’. Also, I’m very aware that there are things that can’t be predicted due to lack of evidence or comparable examples; in those cases what I’m looking for is whether the predictable songs fail to add up to the lower edge of the predicted numerical range. Such a situation reveals a gap that hints at other songs, whether covers or rarities, having crept into the set-list leaving these ‘ghosts’ — a gap of nine, ten, however many songs that ‘should’ have been performed if we’re even to meet the lowest predicted number.