What was striking in yesterday’s headline figures on Nirvana and their live compadres was the loyalty Nirvana exhibited to old friends and favourites throughout their career. The table below shows the bands Nirvana played with over more than a single year: 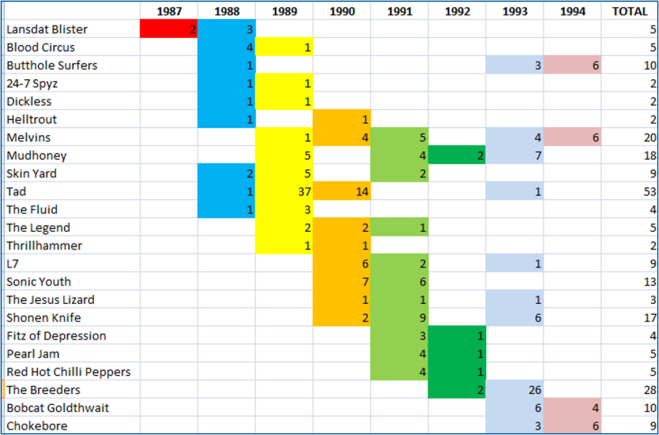 Now, this’ll probably come as no surprise, but Nirvana played with Melvins in five of the seven years in which the band was active; Mudhoney and Tad in four; Skin Yard, The Legend, Butthole Surfers, L7, Shonen Knife, The Jesus Lizard in three each. It’s that loyalty to old friends that sticks out for me — the band switched side-acts regularly, shared stages with 234 bands, yet the bands with whom they played the most regularly were the comrades from early days. Instead of prioritising ticket sales — there was no equivalent of the Guns n’ Roses/Metallica tag-team here — in 1994 comfort was the priority so of the seven bands played with that year, four had been toured with in previous years and eight of 20 in 1993. It’s always been noted how hard Nirvana worked to elevate their friends and the way they never dropped friends seems clear.

I’m also gratified to note that Nirvana’s protestations that they were a band solidly aligned to the underground — regardless of records sold, awards won and media glitz — is shown to be true by an examination of their live partners. Nirvana played with a phenomenal array of near unknowns from beginning to end of their career —it’s clear how grounded Nirvana were in their declared milieu, they weren’t a band surrounded by future superstars.

I graded bands on the basis of (a) reaching mainstream acceptance (b) remaining top-level indie/underground heroes (c) achieving a degree of recognition and respect in the underground. Very few of the bands with whom Nirvana shared a gig came anywhere close:

This view is provided per year but note the overlaps; six mainstream stars, nineteen top-level indie bands, eighteen recognised and respected, but solidly underground, acts — just 43 of 234 unique acts; Nirvana played with 191 near complete unknowns over their seven calendar years.

Of course this view could be read another way; as percentages per year:

Quite clearly the quality of bands Nirvana were playing with did indeed increase almost year-on-year right through to 1994; if I’d counted Cypress Hill, The Disposable Heroes of Hiphoprisy plus Bobcat Goldthwait too in the mainstream/indie/underground divide the figures would be higher. The blip in 1989 is noticeable and I actually wonder if that’s a reflection of the shift from what would soon be the hottest local scene on the planet (remember that my mainstream/indie/underground division is as much about media coverage as it is about sales) to touring nationwide where Nirvana were just one among many hopefuls; a surprising percentage of Nirvana’s North-western contemporaries went on to relatively successful careers.

The shift in 1993-1994 reflects a further reality; that Nirvana’s success had finally kicked the alternative into the mainstream – my rating of bands doesn’t just reflect those bands, it also reflects what Nirvana had helped create, the success and critical appreciation of their fellow bands was made easier by Nirvana acting as the figurehead and key representative to mainstream audiences.