In total the October-December 1993 touring season contained only two completely unknown set-lists — November 26 and December 15 — plus seven partial incompletes; we dealt with October 19 and October 25, 1993 yesterday. The Fitchburg/San Diego unknown song’s appearances on November 12 and December 29 were separated by a full twenty shows, appearing to show that at least the kernel of an idea was persisting (thank you to the denizens of the LiveNirvana forum for the San Diego audio here):

I’ve tried to show, visually, what else we’re missing from late 1993; I know this is like a magic eye picture but take a glimpse at it:

What we’re looking at are variations on a fairly rigid structure; as clear examples the Pennyroyal Tea line straight across the middle is beautiful, while the intro is firmly established and never flexes. By looking at the shows surrounding each of the gaps, accepting that once or twice the band swapped in/out songs or changed an occasional song position, it’s actually fairly easy to predict what was played. I feel that the gaps are all fairly obvious — this covers the missing shows on November 25 and December 15 too. I propose the set-lists we’re unable to see looked as follows — I’d put money on these bets happily: 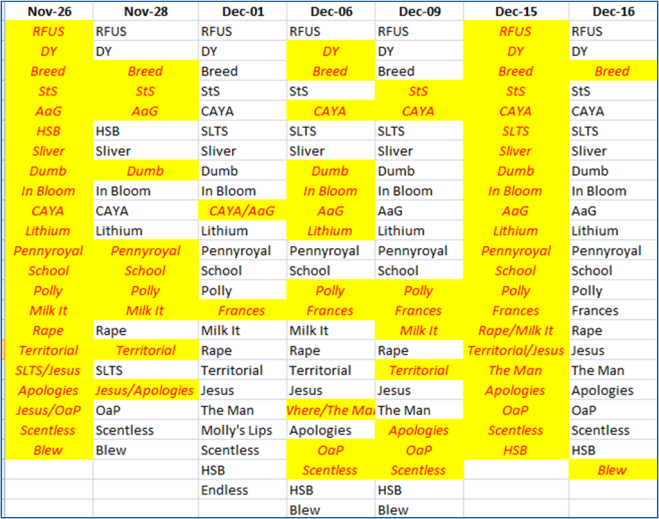 The only data we have to go on for these dates is the coincidences with shows preceding and succeeding them plus some shreds of information; for November 28 it’s reported that the band played 22 songs which fits perfectly. In relation to December 16, the report is 24 songs were played of which only 21 are known. As well as adding Breed, I’ve added Blew on the basis it was played in 6 of every 7 Oct-Dec complete set-lists; 29 in versus 4 out. That leaves one song I can’t bet on; my likely candidates are Territorial Pissings (it was a common feature preceding Jesus Wants Me for a Sunbeam), or Milk It which had been an on-off set-list fixture throughout.

So what of the ‘unknown’ jam witnessed on November 12 and December 29? Well, alas, once again, as the song was used as a closer, we’re still stuck though only December 15 and 16 seem likely given the known finales. Having projected last week that there’s potentially several thousand unknown Nirvana performances hidden in unseen set-lists it’s sad that there are few miracles likely. For completeness, let’s add on the October dates plus the 1994 dates and I think we’re looking at the following MAXIMUM renditions missing from the whole In Utero tour: