Reading the various biographies of Kurt Cobain and Nirvana, the point is frequently made that Kurt had lived what could gently be described as an unsettled and nomadic existence pretty well from the time of his parents’ divorce in 1976. Ladled out on top of that is a patina of genuine poverty throughout his later teenhood leading to periods of homelessness stretched right through until he hit twenty in 1987. Relative stability arises from that point yet still there are tales of being slung out of rented homes even as late as the middle of 1991 when he was now 24. Linking together the references makes his later life seem a more moneyed return to drifting with hotels filling gaps even when he wasn’t on tour or fulfilling band duties. Purchasing a home for the first time in 1993 simply doesn’t stop that sense of a man floating free of physical locale — the final year of his life saw him buying one home, renting another, buying another, while simultaneously spending regular nights in motels and drug hangouts.

Sourcing the data, I ended up simply staring at it — adding up the regular moves brought home precisely how devoid of refuge the life of Kurt Cobain had been: 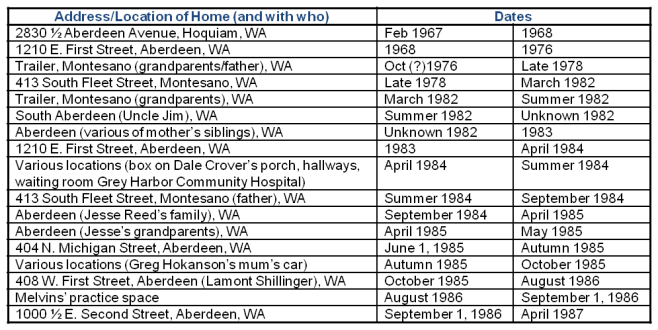 This is the life of Kurt Cobain to age twenty. It was hardly a comfortable life in the early days given the combination of tight financial circumstances, mounting parental discord leading to the parents splitting in March 1976 before a final legal pronouncement of divorce in July, then the spell sharing a trailer with his father and grandparents, followed by the spell with his father and eventually his father’s new partner and her children. But it was from March 1982, once he had turned fifteen, in the aftermath of ever-increasing battles with his father, that Kurt’s living arrangements implode.

From the age of fifteen until the age of twenty he barely stayed a year at any address. There are nine definite homes in which he lived during that phase and one period where, at best, it could be said he was a ‘guest’ of various relatives and relations. During this crucial phase of life it’s easy to understand why the conclusion of formal schooling became challenging, likewise why, existing disaffection would be expanded into an all-encompassing sense that he was unloved and unwanted.

Further reinforcing the sad picture, in each of 1984, 1985 and 1986 he endured spells of homelessness. To be fair, none could have lasted longer than a couple months but still, for certain periods of his late teens Kurt Cobain barely knew from day-to-day where he was sleeping. He was even forced back in with his father despite the extreme tension between them — his dad found him living on a couch in a back-alley. Again, it makes it easier to understand why locating regular employment proved challenging given his disrupted living arrangements.

By 1987 he had lived through seventeen different locations or phases in his young life. The longest he had a home for was the eight years that corresponded with his infancy and the only time when he was part of a true family — the coincidence of family love and physical security reinforces why he would remember it as an idyll lost forever.