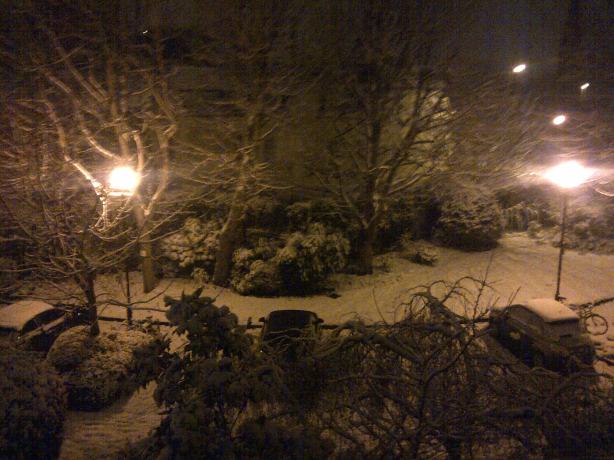 When Public Enemy were nominated last year for the Rock and Roll Hall of Fame and Museum they explained that the band had “brought a new level of conceptual sophistication to the hip-hop album, and a new level of intensity and power to live hip-hop, inspiring fans from Jay-Z to Rage Against the Machine to Kurt Cobain.”

Beyond the desire to name-drop a still iconic superstar, the reference does display the one real indication that Kurt Cobain acknowledged the world outside guitar-based music. Public Enemy’s It Takes a Nation of Millions to Hold Us Back featured on the list of Top 50 albums in his Journals as a sole representative from hip hop. It’s an easy album for non-hip-hop punk rock-orientated music lovers to like given the extreme sonics, the densely layered sound and the talented polemical vocals on display; it even earned Chuck D a Sonic Youth cameo. Cobain went so far as to state that “rap music is the only vital form of music introduced since punk rock,” which acknowledged its impact accurately, yet there was no cross-pollination — Nirvana’s music existed in a solidly guitar-based milieu with nothing bar that nod of respect.

On the other hand, however, acknowledgement of Kurt Cobain has become a relative commonplace within hip hop. Previous articles and online discussions have documented his presence within lyrics, in the past twelve months I’ve noted “you a broke N****, kill yo’self Kurt Cobain” from Waka Flocka Flame on Gucci Mane’s Trap God mixtape; Kayne West opting for “rocking flannels all summer like Kurt Cobain,” on the song White Dress (from The Man With the Iron Fists soundtrack); while The Game opted for “so strange had to blow they mind, Cobain” on the title track of Jesus Piece; the up-to-the-minute burst of “Kurt Cobain even died because you scrutinise” from A$AP Rocky song Phoenix released earlier this year. What’s immediately obvious is that these aren’t precisely highly inspiring lines. Hip hop’s level of engagement with Kurt Cobain hasn’t moved on at all since Eminem rapped “my favourite colour is red, like the blood shed from Kurt Cobain’s head” a full decade ago (Cum on Everybody.)

The references are far wider than the lyrics too; Tyler the Creator, almost tragically, displayed the deepest Cobain knowledge on display for referencing Kurt Cobain’s baiting of Rolling Stone. Tinie Tempah shows he’s taken his view of the world from PR-puff-piece reporting with the following January 2013 facile comments:
http://www.contactmusic.com/news/tinie-tempah-waiting-for-new-kurt-cobain_3437647

While Jaz-Z barely rose above that level in November 2012 with this snippet:
http://www.stereoboard.com/content/view/175763/9

The other week, in a comment on Nirvana-Legacy.com someone asked about the impact death has on the ‘love’ for a person; the presence of Kurt Cobain as a meme with hip hop is one of the consequences. No other figure from the world of rock music has even a fraction of this pull. His death, a cultural news event that was inescapable anywhere in the United States, was large enough to cross the musical boundary in a way that the mere success of a band like Guns n’ Roses, or the outrageousness of their frontman Axl Rose, was unable to. Timing is also crucial; John Lennon was the previous music world event of this weight but it took place before most of the hip hop stars of the past ten years were even born; this leaves Cobain as the reference.

Yet, despite having been allowed to penetrate the world of quips and quick studies that constitutes modern hip hop lyricism, it’s very clear that there’s no point taking seriously the depth of consideration given within any of the songs discussed here. There’s no piece of art here that has spent more than blinking time on their Cobain reference. What we’re witnessing is a consequence of the commercial nature of present hip hop which values the ability to pump out product at high-speed and therefore favours those able to slap together endless rhyming couplets over song-long (or frankly even verse-long) meditations on a topic. It’s not worth wasting emotion being worried about the depth of these song references when none of them constitute more than single bar of punch-line thought on any theme.

What we’re witnessing though does have interest. Firstly, we’re witnessing the impact of death on an individual. What occurs, and this is not a characteristic specific only to hip hop, is that they’re reduced to snapshots in a process of reduction and simplification. A non-musical example would be the way that Winston Churchill (at least in Britain) is barely more than a gruff-voiced metaphor for stubbornness and patriotism. An individual becomes a short-hand reference, a meme that everyone knows even if they know nothing else about the person being referenced. In the case of Kurt Cobain, the lyrics quoted summarise him as, primarily, suicide via a gunshot wound to the head. There are some that dredge up drug references, not even, necessarily, heroin. Kurt has simply become another all-purpose image, likely to die out inside of a decade as a generation for whom Kurt Cobain is distant past take the pop mantle, but serving, for the time, being as an easy rhyme and a quick way of saying blood and mess.

Slightly more disturbing is the way in which PR stories substitute for any contact with reality at all. Kayne West’s grunge-wear reference (*shudder*) doesn’t make it any deeper than a scan of glossy women’s magazines circa-1992-1993. The connection between Kurt Cobain and flannel is…A load of old flannel. What Kayne has absorbed is the sillier manifestations of the grunge explosion with Cobain having to wear all its results given he was held to be its figurehead. Similarly, Tinie Tempah’s, quite charming, desire for an individual to ignite and unite the world of music has absolutely no basis in reality. Cobain never ‘spoke for a generation’, he was never the voice of an identifiable and unified group, let alone for the full diversity of youth c1991-94. Again, the desire at the time to explain Nirvana’s rise by a reference to some brand-new social grouping, was an oversimplification used by the media and that has now been repeated so often that a man who was a mere nine years old at the time of Cobain’s death has totally absorbed it.

Jaz-Z’s curtailed history of hip hop’s rise in the early nineties has, initially, an appeal. Yet it too, ultimately, has no substance. He’s unable to equate a broad culture with anything other than chart success and PR-presence in the pop world. He can’t see that hip hop didn’t ‘pause’ in the slightest just because a few rock bands took a large share of a declining rock audience. A$AP Rocky, unusually given he’s the youngest of all the individuals mentioned, is at least closer to the truth with his one-liner implying that the loss of privacy was a factor in Kurt’s death.

I’d love to point to Kurt Cobain’s ‘realness’ — his absence of career-motivated fakery, his unwillingness to bow to the demands of PR — and make a link to hip hop’s fetishisation of that concept as a reason why he should be so acceptable to hip hop’s stars such as Lil Wayne. And certainly the musically omnivorous nature of hip hop means it’s no surprise a few of its denizens appreciate the music of Nirvana. But there’s not much depth to the connection, no more than there was when pop music went through its brief spell of ‘rock star’ catchphrase worship a few years back. It’s good Kurt Cobain meant something to them, but in terms of it translating into a genuinely imbuing of his anti-commercial spirit into the modern pop world…No. Hip hop, in its mainstream manifestations, increasingly speaks for a triumphant few who wish to parade their wealth; misogyny; aggressive self-centredness. While enjoying some of the music I often feel I’m the equivalent of people buying books by the CEOs who have just put them out of work just to learn the awe-inspiring truth that those bosses see themselves as unique individual successes based wholly on their own genius. Kurt Cobain never led the indulgent lifestyle of conspicuous consumption; never willingly exposed his whole life for PR benefit; ensured his political values (anti-sexism, anti-racism, anti-homophobia) were declared loud n’ proud on multiple levels and never wrapped his arms around business.

Like Loading…
← Oh…Just While I Still Find it Nice…
→ Dark Slivers: What do the Chapter Titles Mean?