The regular arrival of fresh covers reinforces the point made in yesterday’s blog that, particular in the early days, while new songs may not have arrived too swiftly in 1987, the set could still be spiced up a little. What is noticeable is that, though accepting that there are gaps in the record, there’s no evidence of the band displaying the punk side of its tastes — they stay solidly reliant on hard rock and pop despite the inclusion of quite a few late Sixties-early Seventies oddities. This seems in part a fair reflection of the band’s own taste and also a crowd-pleasing match for the Led Zeppelin worship prevalent in the Seattle scene of the day.

Nirvana’s work is full of wonderful symmetries, some coincidences, others not. One I particularly like is that Do You Love Me’s performance in June marks the passing of that early hard rock spell in Nirvana cover songs. November then marks the new life, Lead Belly arrives in the set-list, The Vaselines; the songs that would mark the alternative identity the band was happier to place on vinyl after that time. A second passing took place at the same time, however. In the early spell, with the exception of the tribute to Led Zeppelin’s Moby Dick, the band were playing mainly full, if ragged, covers. With certain key exceptions over the years to come (i.e., the songs that made it onto Incesticide or that were reprised for MTV Unplugged) an awful lot of Nirvana’s live covers became brief bass jams, or snippets covering up restringing, retuning, other on stage logistics and live administration.

Seeing the first two years, originals and covers altogether, emphasizes how hard-working this band was in their performances: 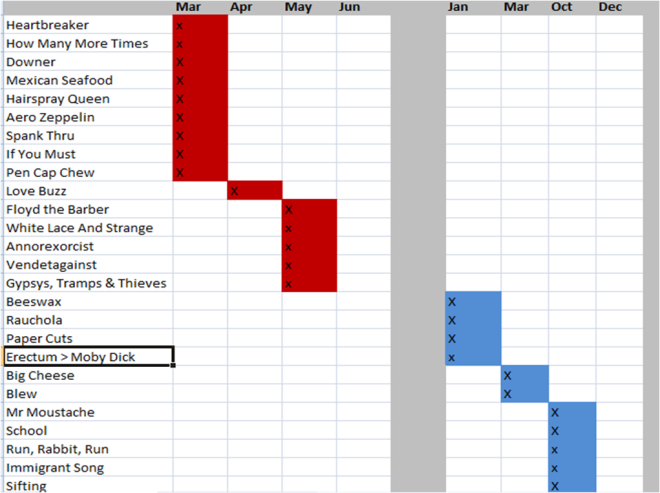 Similarly, 1989 — this was a band working exceedingly hard learning, practising and performing new songs month after month. It can’t have come easy, this was a triumph of will and the desire to excel in performance. They could have simply whacked out the same set-list over and again but instead there’s a visible striving to do more: 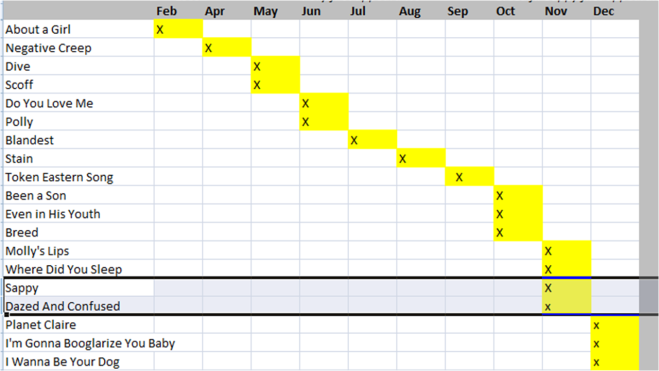