There’s some amazing work out there on the web, tributes to Kurt Cobain, copied images of the man, studies from photos and so forth. The only small disappointment I have is that the majority of images rarely extend beyond extensions of photography — there’s a fetishisation of his ‘prettiness’, the kind of beauty visible in the best Rolling Stone images of Kurt that voids the more grungy side of him. Also, I’ve argued that Kurt Cobain was a far more complete artist (of the self-taught variety) than he is given credit for; he worked not just with music but also with sound experiments, art installations, video work, paintings…Whatever allowed him to express. The relative absence of tributes in forms other than the musical and the hagiographic has been a little sad — the man was about far more, it’s a shame the memorialisation hasn’t moved beyond the form and imagery that would fit a standard-issue corporate magazine.

Which meant I was extremely delighted when a gentleman in Scotland got in touch and shared a piece he’d been working on — I asked his permission to share his work here; I feel safe saying that I have massive respect for the name Marcus Gray because he’s a rare individual doing something truly different in the art realm.

The PARASITE project has a cynicism I tend to believe the man himself would have appreciated; it reminds me of the kinds of self-depreciating statements Kurt Cobain used to make about how derivative he claimed Nirvana were. In precisely the same way the way the project is named and wrapped underplays the thoughtfulness on display (the link here shows up as a photo):

The box itself is a wonderful comment on the picking over of Kurt Cobain’s legacy; if they’re going to authorise Kurt action dolls, endless product, mythologise his death ad infinitum then fine, why not sell replicas of his heroin box? There’s a clear depth of knowledge involved — the quip about Silver/Sliver is a neat reversal that made me chuckle — and that makes it very clear that this is a tribute made in love for the subject and individual concerned. The intelligent thought involved far outweighs the lazy reliance on standard-issue pretty eyed photos. The mimicking of the Sub Pop Single Club is a similarly clear reference — if its respectable to deliberately create scarcity to build exclusivity and desirability of music, then why not for art? It’s a fair question; what works or could work across genres of expression…? The combination of figurines, fabrics, printed word and so forth is far closer to the multi-material approach of KC.

The photos themselves are a neat set of close-ups that rely on a broad awareness of Kurt Cobain’s story and his existence as a visual phenomenon; a lot of the photos, the striped jumper shot for example, evoke a specific time and era of Kurt’s existence yet without that knowledge it’s simply a voided impressionistic pattern. A true favourite is definitely the close-up on the Vanity Fair article — it’s hard to underestimate the impact of that one magazine piece on Kurt, his family, public perceptions of the family, the change in media reportage so to focus in on the single couplet picked out is shrewd, ironic, sad all at once.

A secondary piece by Marcus, again an intriguing piece is also present buried later in the Parasite project. The artist traced each letter in Kurt Cobain’s suicide note onto individual sheets of paper creating these clouds of letters — I admit to liking the effect of having page after page side-by-side, the ripples in the paper, the different shading on the photos taken, the way letters gust across the page from one place to another, rigid lines or swirls. Mr. Gray has protested to me that he actually kicked it off in anger at the way arts funding is handed out in the U.K. to ‘stunt art’ (my term), art with a shock value or novelty but not necessarily of much depth, skill or true intelligence at work — this was his way of reacting to that. He’s totally right I’m only sorry that the Arts Council didn’t have a look at this! As usual something commenced with sarcastic intent can float free of its origins and end up as something with a genuine beauty: To allow the artist to speak for himself, he mentioned in an email “I think the “Number Nine…” is pretty poignant, given the way the first person “I” gets larger towards the bottom, where perhaps the heroin is perhaps taking hold, or Kurt’s rising sense of panic and awareness at what he’s about to do…” This point has deeper resonances for me; when listening to the Do Re Mi demo the most prominent feature is the constant focus on ‘I’, there’s almost nothing else in the song bar the narrator’s limited connection with the world (“I’m dreaming,”) and limited possibilities in which everything is a maybe (“wake me up”/”if I may, if I might, if I do, if I say”). The rising ‘I’ makes an awful sense.

His concept of how the piece could have been presented in multiple ways was also fascinating — the idea of this same single source being extrapolated in different ways including the following “I’ve also decided to do them as a series of 26 large Perspex sheets, which will be a simultaneous installation. They will be mounted, and you will be able to see each sheet through the other, as it were, so they’ll be in a long row of parallel sheets with say a foot or two in between, each being slightly larger than the one in front to account for perspective. On a quiet day in the gallery (and how likely is that!), you’ll be able to look straight through each sheet to see the entire suicide note made up of its composite letters.” That has a certain cool to it.

Anyways, I’ve enjoyed and respected the work going in here — someone doing something other than just retelling the known story, someone taking the materials of the Kurt Cobain/Nirvana tale and creating different frequencies of response. Mr. Gray, a respectful bow in your direction. Keep going fella.

Take a look at photo 2 – for the Brits among you, can you see any subtle hints that I was in Chelsea? For the non-Brits, I’m sure every city has a bit like this, where the rich n’ mad come out to play… Photo 1 meanwhile, well, London has all of a centimetre of snow so naturally it’ll grind to a halt.

Anyways I added the Nirvana Related New Music category to the blog sorting options today. There are three people who inspired me to do this. The first, whom we’ll discuss today, is Brett R. of band Egg Eggs; the second is Adam Casto of Nerd Table; the third is Adam H. over in LA who has shared some music with me that I’m itching to drop on here and that I WILL be buying soon as he lets me (genuinely, I promise you this guy is worth waiting for – there’s a real treat coming.)

I’m still working slowly on a post on the topic of Nirvana’s Legacy but it seems redundant as I’ve come to realise so many of the fans who have bought the book from me are active musicians in their own right; that’s the legacy right there, individuals with the guts n’ bravery to stand up, create something, express something. If there’s a legacy then looking at the grunge-dyed lame hard rock acts of the late nineties isn’t the place to go – it’s the people ploughing their own roads regardless of commerciality. I always come back to the fact that Kurt Cobain’s most unique act was to stand on top of the music industry, look at all it was offering him if he would just compromise, sell, give them friendly product…And he refused.

So! Brett…Brett kindly took the time to place his review of Dark Slivers: Seeing Nirvana in the Shards of Incesticide on Amazon.com this week – was delighted to see it, thought it was balanced, articulate and fair, kind even. Meanwhile, we’re here to celebrate his birthday for which Feeding Tube Records (who have done the world a considerable service issuing lost live recordings of no wave band MARS) have honoured the man with the Moose/Big People Band/Diagram A & Belltone Suicide split LP entitled ‘Fuck Brett’. Its so touching it brings tears to the eyes doesn’t it…?

Here’s a sample, the album will be out imminently:

The liner notes are extensive and tell the tale of the full birthday party (June 23, 2012), this is just another snippet of a far longer and more articulate tale with extensive photography also: 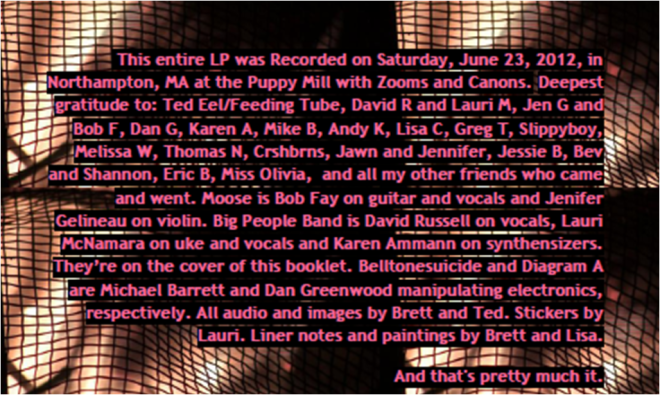 Anyways, happy birthday Brett, thanks for the Nirvana wisdom that you’ve brought to my efforts to tweak the next print run of the book and congratulations on the release.

This past week I heard from a guy called Adam Casto who dropped me a line very kindly just saying “just discovered your website. Man, it’s killer.” Maybe it’s my Britishness but, as I say when people leave comments on the blog, I’m still pleasantly surprised and pleased each time anyone tells me they’ve been enjoying what I’ve been up to here.

Turns out that Adam supplies vocals to a rather intriguing band called Nerd Table (www.nerdtableonline.com) with quite a remarkable cast of collaborators on their 2012 album release Chasing the Bronco…

Aaron Burckhard and Dale Crover both play on a cover of Floyd the Barber (drums and backing vocals respectively), on a track called Noise of Earth Part 4 (drums and guitar respectively) and Dale also provides guitar on Terri Schiavo (Reprise.) Further adding to the universe of Nirvana-circling figures, Cris Kirkwood of the Meat Puppets contributed to the artwork.

The cover of Floyd the Barber is available at the band’s homepage, definitely worth a listen — I like how good the tune sounds even shorn of its murky grunge, late Eighties sound. What I like about this, and about Deervana (see last week’s post) is that in each case the band simply enjoys playing the music they love, they’re not mimicking or trying to forcibly press their own sound into a Nirvana-shaped mould. The fact Adam has a more snarling voice sounds great with these lyrics, no karaoke pretence of ‘becoming’ Kurt Cobain, just taking the song on, making it less glowering and dank (Kurt always made it sound so seedy and rundown), more of a razor, more ‘metal’.

With thanks to Paul Tripi, it’s time to relax, and you know what that means…

…Well, today it means checking a band playing full sets of Nirvana covers and indulging their inner fan boy. What’s neat is how well Nirvana’s songs sound in other hands, the simplicity of construction and sound make the instrumental attack easy to duplicate. The voice is the element representing the greatest difficulty, John McCauley does it well simply by leaving things unpolished, his voice fraying at the edges. The idea of an established band taking time out to play the songs of their heroes is certainly endearing (no pun intended) and pleasantly whimsical; the fact they do it well is pleasing. It enhanced it for me that the band don’t bother dressing up or trying to disguise themselves AS Nirvana, it’s better this way as they’re never anyone over than themselves. That honesty is welcome.