I’ve muttered on about Lollapalooza before, this is just a very brief addition to the topic. I noted that Perry Farrell and the organisers hadn’t been asked about it. A few brief attempts to contact Mr F didn’t get far so I just popped a question on Twitter – land of those incapable of making an extensive or wide-ranging argument or luxuriating in a flow of words (a comment on the medium not Mr F I assure you – he’s a sharp guy!) Anyways, just a minor addition to the store of Nirvana knowledge but he did reply with the following: 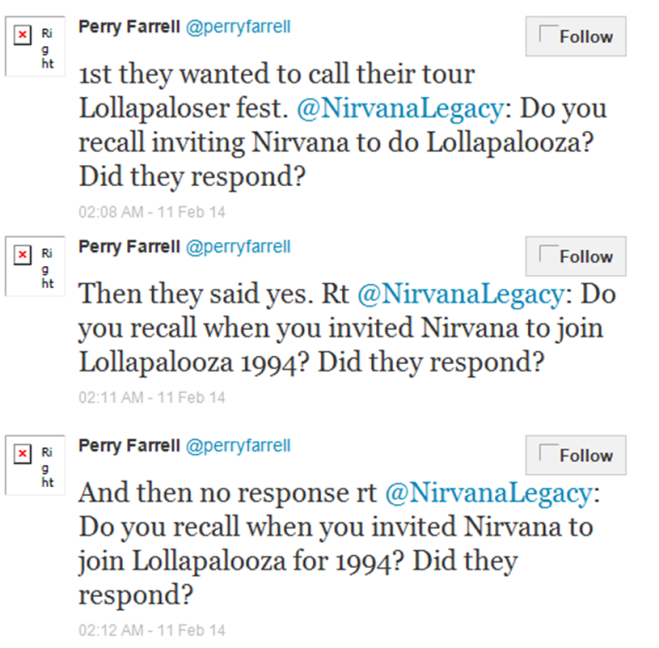 Not a major addition, more a touch more chronology indicating that the band did accept – after one of their usual bursts of word play and teasing. I shouldn’t credit Cobain with all light plays on words but it does hint that he either was involved, or that he had allowed someone to go ahead and agree on his behalf even if he had only the slimmest intentions of going ahead with it. The silence is just fairly typical passive-aggressive North-West behaviour – best not to reply than to offend by saying something someone might not like or might come back on. It was suggested to me the other day that this is a fairly common characteristic of the area – a bit like how I was once told that the Japanese would rather move office and disconnect the number than say no to you on a phone call. As I’m British and therefore make weasling out of blunt honesty a core part of my average day I can definitely sympathise.

I’d simply been curious regarding what point in time the invitation had been made – this is still up for grabs. I’ve never been a fan of the idea that Cobain plotted his end over a lengthy period of time and I was wondering whether the invitation was made in late 1993 or whether the band received the invitation in the spell from February onwards when he seems at his worst. Ah well, nice there are always questions.

5 thoughts on “Nirvana and Lollapalooza”